In the not-beginning, there was…

In the same idea than my previous and first article in the Dreams of Ylina indieDB page, I will write a little bit about my gamer experience, back in the days when The Offspring was about to be famous but still independant: the early 90s. 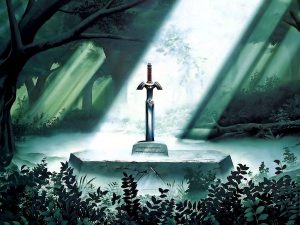 The Legend of Zelda

If I ever write other articles on this blog, I may write about the 80s too. So why not write chronologically if I’m talking about my gamer experience? Because the game I had chosen to write about is what I consider now, for good or bad, the turning point of this gamer experience.

And the winner is:

Before that I had played Sonic, probably Flashback on Genesis (Sega Megadrive here in France), and Street Fighter II on Super NES. With Zelda, I found what I’m still looking for now when I play games (at least the games I love the most): Story/Exploration/Dialogs. Which I may call: SED. Or DES. Or EDS. Whatever.

Let’s see: Recently I have tried: Skyrim/Oblivion, The Witcher, Mass Effect, Bioshock Infinite, Life is Strange, to say only a few. Yes I said recently, because, well, I had stopped gaming between the Playstation 1 and Skyrim, basically.

What can be taken from that in making an indie game?

Well, first of all: Pleasure: if possible: playing my own game after a while, to see how I love playing it. Just exploring things for example.

Then, balancing between exploration, and side quests, items, special places, etc.

Then: the story: complex, complex, I’m loving complex stories. I love multiple endings too. The story for Dreams of Ylina was originally linear. Now, I’m thinking of making a few moments/choices, where you can change the ending, therefore I have to make different endings. Cinemachine and Timeline in Unity3D 2017 are just in time…

Finally: music. I write rock/metal songs for almost 20 years now. I’ve studied classical (baroque) writing (you should definitely listen to Bach and Corelli, among other, just saying). I use EastWest Composer Cloud. I have some materials I need, now I just have to work on original musics for Dreams of Ylina, and convey as much emotions as the story allows me to.

After finishing playing the game, I want players to feel empty and as confused as after a good Twilight Zone episode.