One Step At A Time

As an indie game developer, or even anyone working on a personal project, especially alone, motivation is a key element of a project’s.

It may sound a bit silly at first, since, well, some people could say: « motiviation is up to you, it’s a matter of will », etc.

For all of us, losers and other people trying to make it in life, we have to hack our own brains.

What I want to talk about here, is, as many people already know, the difficulty of maintaining motivation on a time frame of several years, working alone on a project, while having a job (or not) aside, and most of the time having a real life too.

I’m not sure it is necessary to make a list of so-called techniques to remain motivated (and I’m certainly no expert in that), but if I don’t do so and I only say the important thing I want to say here, this article would be at best 2 sentences long. Since I want to write a real article and not just a tweet about it, let’s do this list of so-called techniques to finish a project…

Define your project before working on it. And by define, I mean, of course, limit your ideas to remain into something not too big, so that you can reasonably finish it. 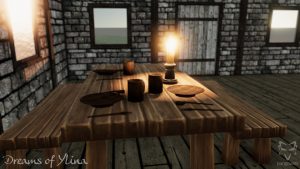 In Dreams of Ylina, I wanted to make something a little bigger than what I had done before, I wanted to make a real Adventure/Action/RPG, in a more or less open world. But I’ve limited it (maybe I should have limited it more) to an island, the island of Ylina. Practically, I reduced the size of the terrain in Unity, to prevent myself from making a too beautiful and huge terrain with Gaia and then having to fill it. And I limited many things on paper first.

Actually I don’t really define all the project before I start coding (booo), I usually work on a paper, then start to make tests in Unity while still defining other things on paper. But still, my point remains.

In the same idea as limiting your project from the beginning, do not hesitate to sacrifice things, some gameplay aspects, etc. in order to focus first on the main mechanics of you game, which can be different from one game to another. 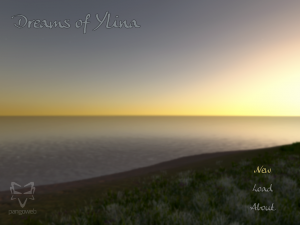 Usually, what we used to say in programming is that the UI is 10% of an app, while 90% of the time you spent on it.

I had read on a facebook group for developers: do you prefer to work on the design then get inspired by it to make the rest, or the other way around? Or something like that. I’m more a fan of defining the mechanics before talking about design, but that’s partly because as a developer, when it comes to design I don’t have enough skills that make useful to have the same work done about design than I have about programming, with UML diagrams, and all.  Of course, I’m also opened to modify the functionalities of the game according to new ideas that would be inspired to me during the level design process, for example. My UML diagrams are not fixed (booo!).

In an ideal world, I would also write on a paper what visual effects, models, light I want for every scene, before even going on Unity. But clearly for that I should first be aware of things that are possible to do in Unity, as well as things I’m able to do. In Dreams of Ylina I am learning these during the making of the game so trying to define it before would have be of little use.

Back to the main subject: why focus to maintain motivation? To avoid taking a side path that’s too long and too far from the core mechanics of your game, just because you started setting up trees on your map, and since you’re a perfectionnist, you wanted to place every single tree before moving back to coding. Focus on the core of your game: this way you can have a working project, which you can polish afterwards. I don’t mean you can’t take a break from coding and do some level design to, i don’t know, use another part of your brain for a while, but always remember to regularly get back to the most important things first, after these breaks.

One step at a time:

In film music composing, I have a class concerning « classical » music analysis (« classical », as in cultivated music, not just the « classical » period of history of music), and I don’t know why but it always take me a lot of time to start analysing pieces like Debussy’s. Partly because it doesn’t fit the classical and romantic structures, therefore, I don’t know where to start. 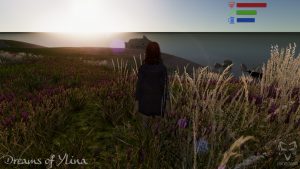 Usually, to get myself started, I start writing general stuff about Debussy, of the piece. Then the characterization of the piece: like, the music is sad, joyful, (of course searching also for other words). Then trying to search for repeated musical ideas, and so on. I do that because it’s easier to find and write, but it makes me enter the piece and then I can try to find more « hidden » interesting ideas in the music. Whereas in many Mozart pieces for example, I’d say: here is the first main idea, then second, then back to the first with variations, etc.

In game developing, it’s a bit different, but the « one small step at at time » principle can be used too. These days, I’m in a situation where the core mechanics of the game are done, still to be debbugged but mostly done, the levels are almost all designed too. What’s left is usually finishing or fine tuning a bit of everything, and beside of that I have quite a lot of work on other things.

I’m not saying I have no motivation, because gladly on this project I have never really lost motivation in the past 2 or 3 years. Now, I have written a list of everything that’s left to do. And I’m more or less telling myself, when I have a few hours to work on it, or more: okay, let’s do this particular thing (like, writing a missing dialog for a secondary quest, etc.). Not thinking about the other things left to do, just focusing on that one step. Then I’ll look for another one.

In the end, let’s say that, as always, it depends on the situations and the people. We’re not all the same (amazing isn’t it?), and knowing yourself, your own way of thinking and doing things, your own qualities and flaws, seems to be very useful. I know for example that I should not try to learn how to use Maya or Blender, or even Z-brush or Scruptris, and try to make by myself all the 3D models I need. Beucase if I do, I’ll either lose a bit of motivation, certainly a lot of time, and the game will be out in 2050.

Same for many aspects or life. Lots of parents have experience the fact of some other people telling them: « you should do this or that with your child ». Sometimes it’s because studies have been made to find what’s better for your child, most of the time, it’s just people who think something they did worked for them, so it will necessarily work for everybody too. Which is usually wrong.

Now I’ve finished writing this article I realize there are certainly many articles more complete on the subject. So, let’s consider this article as a filler episode for the blog.